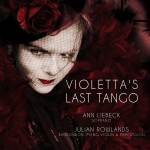 Violetta’s Last Tango is an album of traditional and nuevo tangos in new arrangements by Julian Rowlands with lyrics in the original Spanish and in new translations by Ann Liebeck.


Opera and tango singer Ann Liebeck has performed in theatres all over Europe and in the USA. For the past two years she has been developing different shows for her production company, Latin Rediscovery, in collaboration with Latin music and dance specialists. The stage show ‘Violetta’s Last Tango’ received enthusiastic reviews from audiences at major London venues (Kings Place, Purcell Room at Queen Elizabeth Hall and Artsdepot) and at the Edinburgh Festival Fringe.

One of Europe’s top tango musicians, bandoneonist and composer Julian Rowlands regularly appears on UK national television and radio and at major concert and theatre venues as a soloist and with Tango Siempre and other artists. His performance with Tango Siempre of their original score to the Olivier-award nominated Midnight Tango was described by the Financial Times as “the tango, raw, intoxicating, speaking with its true voice”, and his solo performance of his own music in Flying into Daylight (2014) won the accolade “Tango Nirvana” from the Guardian.

Violetta’s Last Tango is available on

and other digital stores.